When you sponsor a donkey for just $150.00 per year. Your funds contribute to the ongoing expenses necessary to provide for the donkey's needs.

A sponsor receives, with a tax deductible receipt, a subscription for the quarterly newsletter and a simple gift featuring the donkey, plus a digital sponsorship certificate. 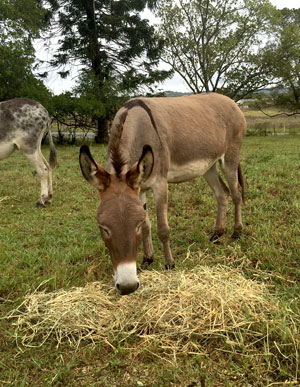 Stella is a standard-sized, fawn jenny with a wide cross over her withers. She was born in 2008 and lived with a loving family of donkeys and humans on the NSW Central Coast. Sadly, one by one her ageing donkey companions died, leaving her an 'only donkey'. This caused her and her humans distress so she was surrendered to DWWH in the hope of finding a new donkey family with volunteers to love and care for her. Stella is independent, afraid of strangers,  but she bonds readily with frequent volunteers who give her kindness and patience as they groom her and tend to her needs.

She has many confidence-boosting donkey friends to share her time grazing and roaming in contentment and peace.

Missy - One of the thinnest donkeys we have rescued. 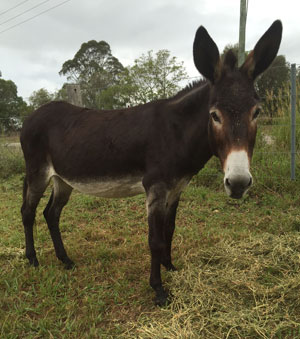 Missy is a standard-sized, black jenny in her mid to late teen years. She and ten other companion donkeys arrived at DWWH intensive care unit in 2011. All were neglected, malnourished to the point of starvation, frightened and unfamiliar with kindness and comfort.

After months of special dietary routines, Missy gained trust in humans, self-confidence and learned acceptable donkey behaviour very quickly. She also gained weight rapidly and ten months later delivered a beautiful jenny foal we named Aria-Jean. Such a surprise to us when we noticed the signs that birth was imminent. The delightful mother and daughter combination thrived on lots of love, good care and handling. They enjoy being part of our ambassador group when we have functions or outings to promote the charity's work and donkeys generally.

Maria - Obese and crippled at the time of rescue. 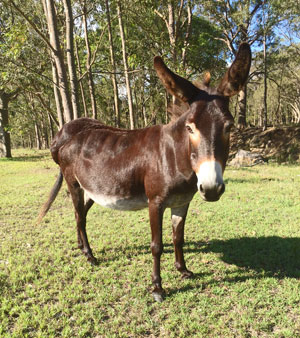 Maria is a black jenny born approximately 2004. She was sold by her breeder as a weanling, along with her donkey friend Pedro. They lived happily with their owner and two Clydesdale horses until Pedro died suddenly at approximately 15 years of age. Maria was grief stricken and became withdrawn from the social interaction she once enjoyed. She was offered comfort-food by her owner, trying to help her regain her zest for life. The extra rich food harmed Maria causing crippling hoof abscesses and excess weight gain. Her kind owner contacted DWWH for assistance and chose to surrender her for specialist, daily hoof care to relieve her of this affliction. After ten months in intensive care Maria was sound on her hoofs and although her weight is still more than acceptable, she is happy and content with love and care and donkey friends to enjoy each day.

She is predisposed to hoof diseases so she must be monitored closely for early onset of any hoof affliction that may arise, crippling her again.

Melody - Rejected by her mother through no fault of her own. 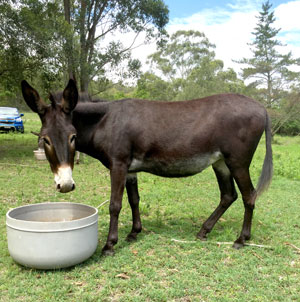 Melody was born on 8th September 2012. Her mother is Ali, one of the same large group of emaciated, rescued donkeys that were brought to the intensive care unit in 2011. Melody is an independent but charming Jenny who, along with the other two foals born within days of one another, made up the beloved triplets, as they were called by volunteers. It was quite an adventure entering their facility, especially with a stable rake and a wheelbarrow, which without fail, was toppled over, the rake dragged away in fun and on more than one occasion the foals attempted to climb into the wheelbarrow. As they grew the volunteers taught the triplets more acceptable behaviour and were given tie-up and leading lessons in the muster area. Melody suffered catastrophic injuries when she became wedged in the fork of a tree trunk when she was three months old. After she was released from her unfortunate dilemma her mother rejected her.

Melody had to return to intensive care for special infant care, or she would die. Melody requires a kind, firm handler and is an energetic, playful jenny in good health and condition. Her outgoing personality dictates that she receives special care and ongoing supervision. 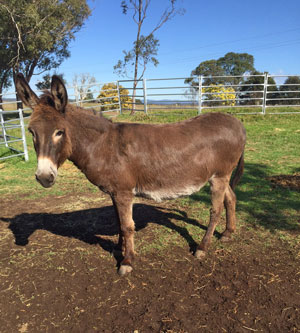 Chocolate was born in 1998. He is a charming, gelding who lives contentedly among a group of donkeys without a fuss or care. He has a kind and gentle heart on the inside and a healthy chocolate coloured coat of hair with a long mane and thick tail brush. Chocolate was transported by DWWH volunteers in 2013 from the South Coast of NSW, leaving his birthplace after his mother died and his devoted owner who knew a happier life awaited him with donkeys to share his days. Chocolate has a history of hoof ailments and we are vigilant in spring and summer for any change that may cause a repeat of his crippling hoof issues.

Chocolate is a beloved gelding who enjoys all the love and care we provide to maintain his good health and he returns it ten-fold. 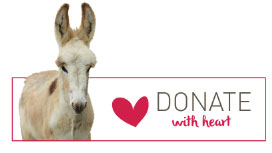 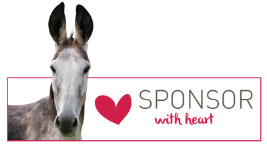 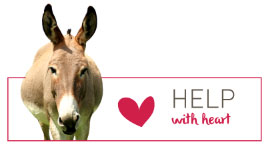 Subscription to quarterly newsletter is $35 per annum. Contact secretary by email or text
0497 580 598 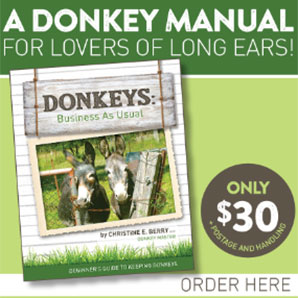 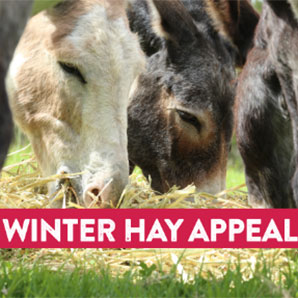 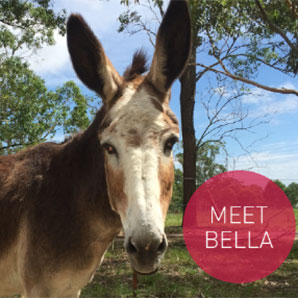